Docklands (also known as Melbourne Docklands to differentiate it from London Docklands) is a suburb of Melbourne, Victoria, Australia, 2 km (1.2 mi) west of Melbourne’s Central Business District. Its local government area is the City of Melbourne. At the 2011 Census, Docklands had a population of 5,791.

Docklands occupies an area adjacent to the Melbourne CBD. It is bounded by Wurundjeri Way and the Charles Grimes Bridge to the east, CityLink to the west and Lorimer Street across the Yarra to the south and is a primarily waterfront area centred on the banks of the Yarra River. 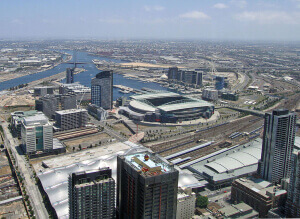